By the Numbers: Why Aren’t Millennials Buying Homes?

By the Numbers: Why Aren’t Millennials Buying Homes? 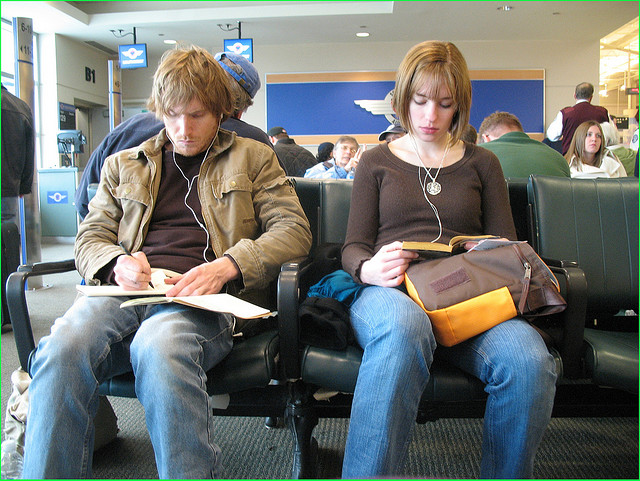 We’re obsessed with Millennials these days, aren’t we? As the economy continues to rebound, it seems like everyone’s looking at young folks to judge the nation’s economic health.

Millennials now represent the largest living generation in the United States, and as such, they’ll be expected to drive the economy in the coming decades. That’s why economists seem to be so interested in what they’re doing.

Why are we interested? Their home buying habits will dictate how the nation’s real estate markets go.

Homeownership rates among young people have been falling for some time now. Are Millennials’ habits behind it? What can we expect from the generation that came of age with Napster, selfies and participation trophies?

We dug deep into the numbers to find what the Millennial generation — people born between 1980 and 2004 — are actually doing.

of adults between 18-34 believe that “Owning a home is necessary to live The Good Life and The American Dream,” according to a recent Zillow survey. That’s higher than any other age range in the survey, and 74 percent of Millennial respondents said that owning a home provides a person more freedom than renting. That’s more than 10 percentage points higher than any other group.

We’ve heard all along that Millennials aren’t interested in buying houses, but it turns out they’re not afraid of the commitment of a mortgage. Millennials do want to buy homes after all, more than any other generation.

So why is homeownership still falling among young people? Digging into the demographics reveals the answers. 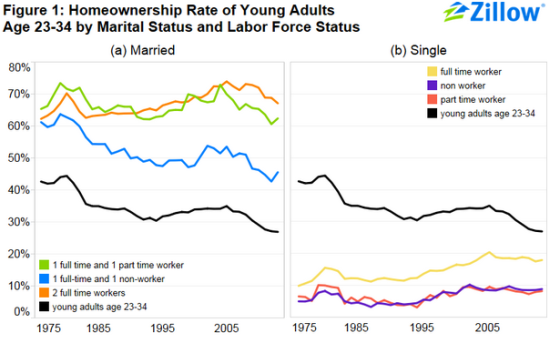 In households headed by two working adults age 23-34 (the typical “modern family”), the homeownership rate is above historic levels.

Marriage doesn’t affect homeownership rate as much as full-time employment, which has been in short supply during the economic recovery.

The unemployment rate for adults age 18-34 topped out at 13 percent in 2010. It has since fallen close to half that, but even with a much rosier job market now, entering a difficult job market has far-reaching consequences that extend well beyond the national recovery.

Beginning a career during a recession can substantially hamper an individual’s earning potential throughout their career, which can (surprise, surprise) affect their ability to afford a house.

Workers who enter the job market during a recession can expect to earn 2.5 to 9 percent less per year than those who do not for at least 15 years after starting their careers.

An explanation for this is that when the job market is difficult, workers will often take positions earning less or working fewer hours in order to simply have a job. We’ve also heard that Millennials value lifestyle over employment and aren’t eager to commit, but they have stayed in jobs longer than their counterparts in Generation X.

That’s pivotal for job security, but according to the White House’s Millennials report, switching jobs has historically been a major source of wage growth for young adults. 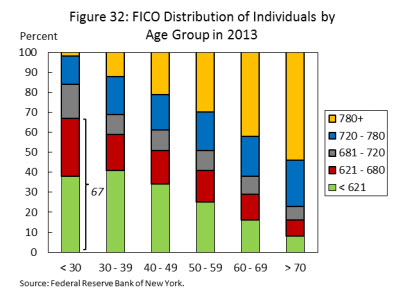 That’s widely considered the baseline credit score to get approved for a mortgage.  You won’t get a good deal — but at least you’ll get credit.

About two-thirds of individuals under 30 have credit scores at 680 or below, a number influenced both by the recent recession and by ballooning college tuition costs. More people than ever are attending college, but costs are higher than ever.

The nation’s outstanding student loan balance is in excess of $1 trillion, and even more troubling, more than 10% of that is more than 90 days delinquent or in default.

Millennials left college and entered a job market with slim-to-nil job prospects, and the debt from college tuition left many with albatrosses around their necks. For others, it left them financially ruined to start their careers.

The economic conditions around their entry to the workforce has caused many Millennials to delay making large purchases. And that’s why they aren’t purchasing homes.