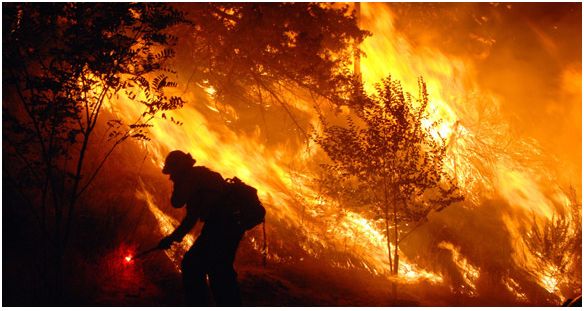 The hustle and bustle of city life is a lot to take.

Millions upon millions of other people.

That’s why some people choose to live in nature – for example, in Colorado they live west of Denver in their “cabin in the woods.” Anything that gets them away from the city life and makes them feel part of nature. Away from the mass of people, smells, noise and pollution.

That, obviously, comes with huge risk from nature, as in wildfire.

NBC News reported that more than 1.1 million properties in the western U.S. were identified as highly vulnerable to wildfire in 2015, according to a report from analytics fast CoreLogic. That report shows that it would cost $269 billion to rebuild those homes.

NBC said the report was written to inform the insurance industry and, perhaps, sway policymakers to encourage fire-safe construction in susceptible areas. The report from CoreLogic focuses on 13 western states and identifies homes in particular zip codes at elevated risk due to the nature of their property or proximity to wildfire-prone lands that could spark fire, as NBC said.

Until recently, insurers paid little attention to the threat of wildfire. Toddi Steelman told NBC that because wildfires make up only 2 percent of total property and casualty claims, an amount falls way short of tornado, hurricane and flood claims.

Yet that is enough for people to stay away from their dream of having a cabin in the woods.

They want to be a part of nature, and the risk doesn’t matter.

To take the risk of wildfire away, as much as you can, experts and insurance experts propose people remove the shrubs, trees and anything else that could spark a fire around the home. It’s called a defensible area, and any neighborhoods (new or old) should use this practice.

“There are an awful lot of neighbors (who) value that in-close feeling of having the trees right there,” Sean McVay, a homeowner in Evergreen, Colo., told NBC. “You can go onto Zillow and cruise through the home that are for sale in Evergreen, and invariably you will find one where they’ve got a tree through the deck … that is the type of people (who) like living up here.”

Until people realize they are not invisible, the risk of wildfire remains high – as it is in 2015.

But be smart about it.

You may hate the hustle and bustle of city life, but putting a tree through your deck isn’t the best way do that.

Remember: it’s better to be safe than sorry.